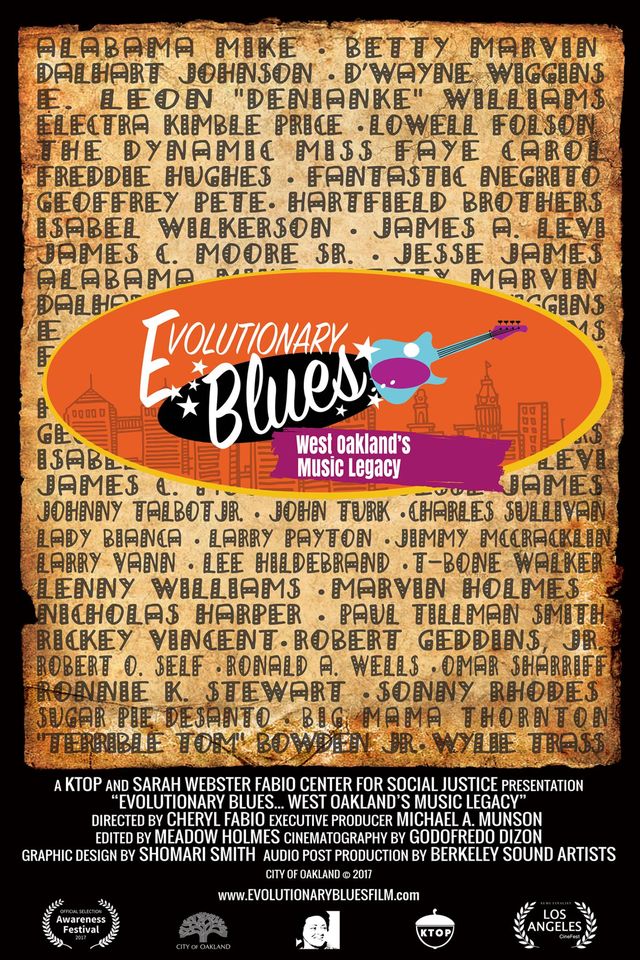 The Breakaway is excited to welcome Cheryl Fabio, director of the film “Evolutionary Blues…West Oakland’s Music Legacy”, to share her knowledge of the history of Oakland’s rich musical history with all of us. She will be presenting her documentary and then will take questions at the end of the film.

More about the Director:

Cheryl Fabio is the Executive Director of the Sarah Webster Fabio Center for Social Justice and Program Manager for Parent Voices Oakland. Cheryl has been working in documentary film since 1976. She was Program Director at Black Filmmaker’s Hall of Fame in Oakland, CA, taught at City College of San Francisco, Managed EATV, and became Operations Manager at KTOP TV back in Oakland. In 2009, she graduated from John F. Kennedy School of Law. Cheryl started a non-profit, Sarah Webster Fabio Center for Social Justice, named after her mother, the great revolutionary poet.

More about the Film:

The Blues is an earthy, soul-stirring mélange of roots music and personal narratives that became the defining soundtrack of Black America. Wherever Black people settled that soundtrack took on a local flavor. In Northern California, the influences came from the musicianship of Alabama, Louisiana, Texas, and Oklahoma. Seventh Street in West Oakland supported and bolstered Blacks who answered the call of the war effort in the late 1940’s. Entrepreneurship created a fully contained community that provided work, homes and all the necessities of life including a fully developed music scene. Watch as more than 30 local musicians share their inspiration and describe the trajectory of the Oakland Blues: how it evolved and what it has become.