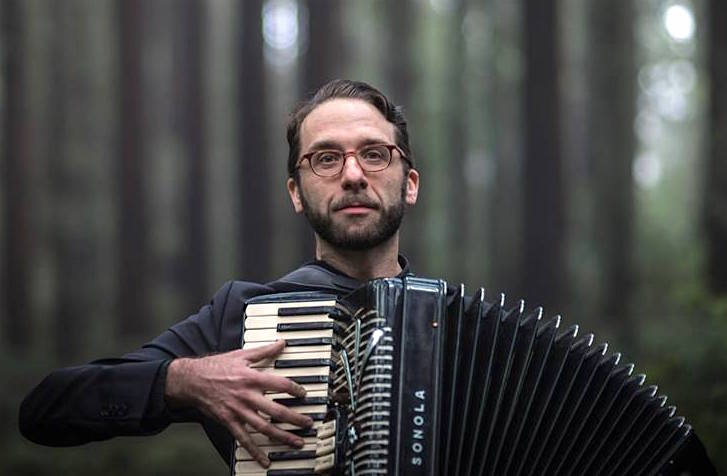 Celebrate the New Year with us by dancing to Rob Reich’s “Swings Left”!

Rob Reich’s “Swings Left” plays swing music for dancers. Inspired by the Benny Goodman groups of the late 1930s with electric guitarist Charlie Christian, “Swings Left” takes off from there, featuring classic arrangements made popular by Goodman, Ellington, Basie and others. Their swinging sound combines hot rhythm with a cool sensibility.

Rob Reich is quintessentially what makes the San Francisco music scene a vibrant and vital mecca for independent music; he’s become one of its stalwart underground artists. Reich starting studying piano at age three. After graduating with a degree in Music Composition from Oberlin Conservatory of Music, he moved to the Bay Area, where he discovered the accordion, now his primary instrument. He is best known for his work with Tin Hat, Gaucho, and Circus Bella.

“Whatever context he’s in, Reich transforms it into a creative hothouse where thousands of musical flowers bloom.” -Andy Gilbert, East Bay Express

Back To Top
We use cookies to ensure that we give you the best experience on our website. If you continue to use this site we will assume that you are happy with it.OkRead more